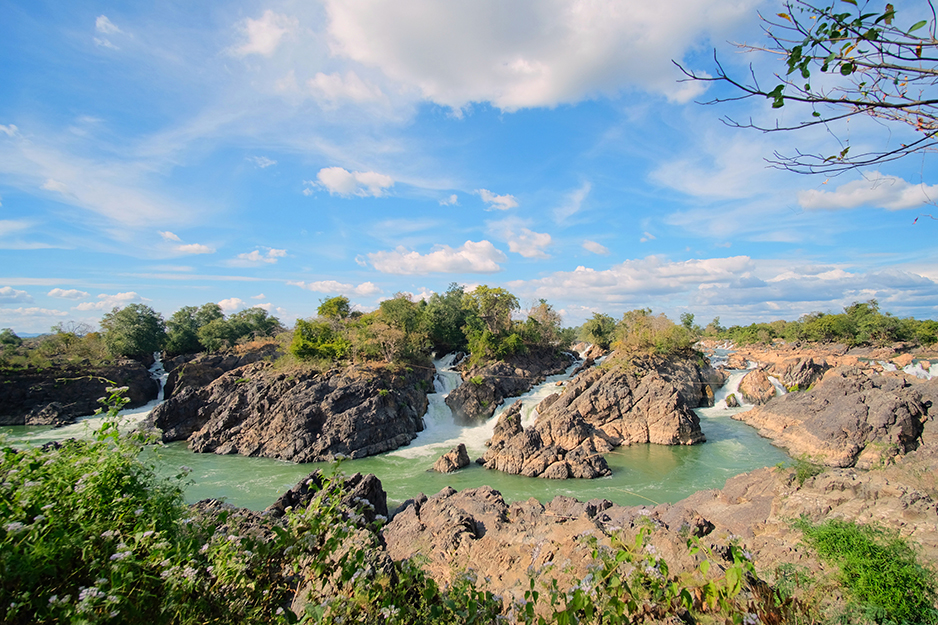 On the map, the 4000 Islands looks like a huge knot stuck in the 4350 km pipe of the Mekong, straddling the borders of Laos and Cambodia. The geographical term for this is “archipelago” an extensive group of islands”

Travelers’ tales are well established about this southernmost part of Laos, that it’s so beautiful, peaceful, and laid back – a hippie haven. People have been known to get lost here for months. Once you arrive, you might never leave. One person said, “it’s like Vang Vieng twenty years ago.” With islands spanning the 14km breadth of the Mekong, its lack of development (there are no cars on the islands), friendly locals, spectacular nature, and a variety of cheap accommodations, the appeal is easy to understand. Ironically, for one of the last and least developed places in Laos, the area was one of the first areas visited by explorers. The French-backed Mekong Exploration Commission in the 1860s was the first scientific expedition to chart and survey the length of the Mekong. Their main objective was to find an inland route to China from Saigon. They were stumped before they even began by the treacherous falls at the 4000 Islands. Nature was having none of that. 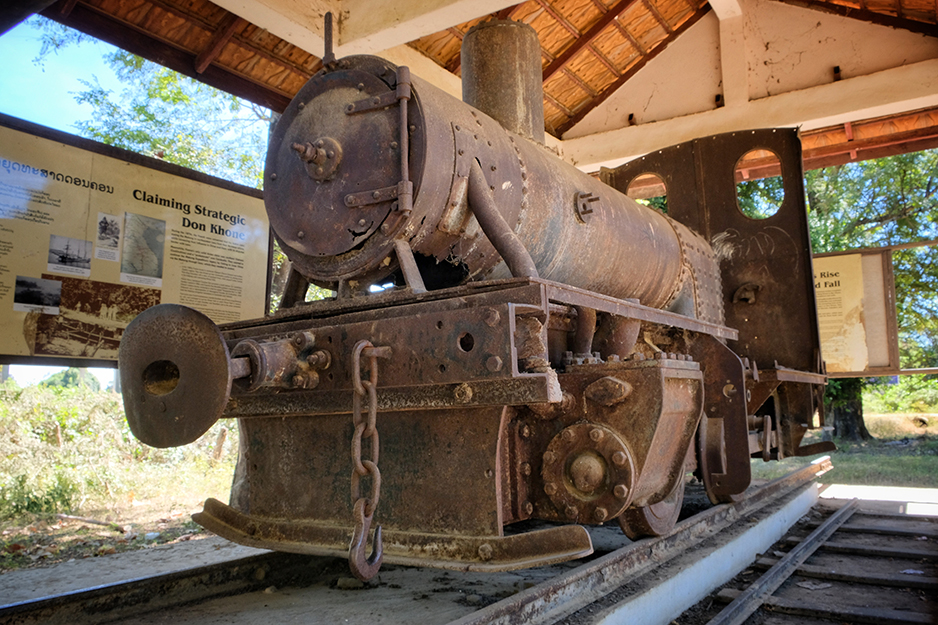 The two main islands on the tourist map to visit are Don Det and Don Khone. At Nakasang, the waterfront is busy with boats of all sizes arriving and departing, bags, packages, water bottles, fishing nets, buckets, and all other essential items are being loaded and unloaded from boats. The Mekong here is a deep sapphire blue and dotted with hundreds of islands ranging in size from a few feet and up, many of them sporting tall exotic grasses. The combination of blue water, colorful wooden houses, weather-worn pirogues, and swaying palms is very picturesque. You can take a log hewn catamaran ferry over to the landing on Don Det. The ride across takes about 10 minutes.

In Nakasang, it’s possible to negotiate a tuk-tuk to Khone Phapheng Falls about 20 minutes away along a decent road. Khone Phapheng is a must-see in the 4000 Islands and is extremely popular with Asian tourists as it is the largest waterfall in Southeast Asia being almost 11,000 meters wide. From the viewpoint about 200 yards away, you can hear the roar and thunder of the water jetting through the rocks like some giant power washer. Brave locals were ignoring the warning signs and fences and clambering over rocks for that all impressive selfie. Returning to Don Det for the night, motorbike rental for the next day was arranged very cheaply. There aren’t many travelers these days on the islands, though most places are open and there are a few resident foreigners stuck there since COVID-19 canceled their travel plans. I stayed in Houa Don Det (the head of Don Det) at the northern tip of the island close to the ferry. It seems most people either stay on the east side for sunrise, the west side for sunset, or the southern part for peace and quiet. 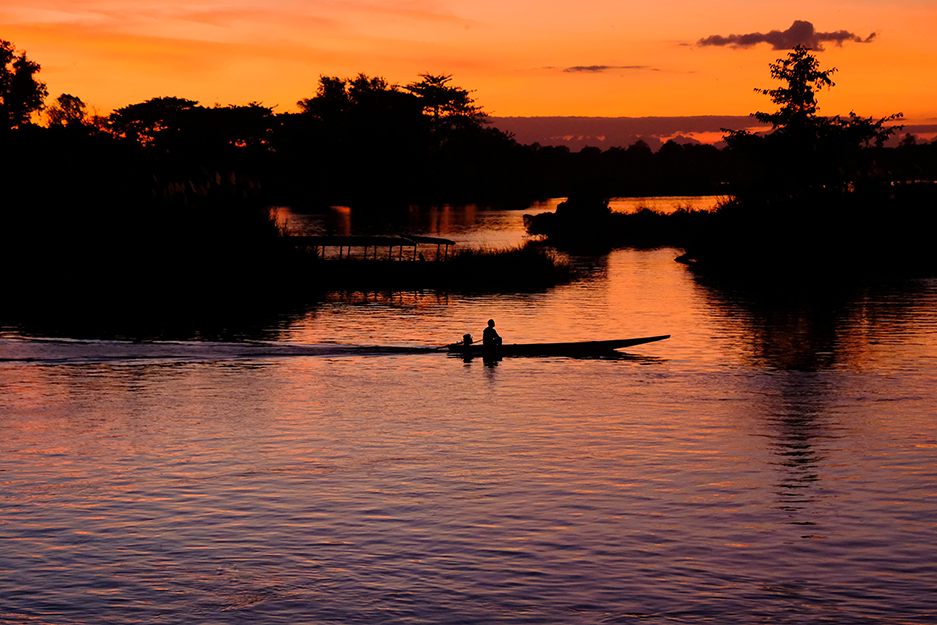 The next day, I followed the concrete path until it turned into a dirt road, carefully negotiating a couple of wooden bridges for fear the frail planks might collapse. Mainly the route was along a small track dotted with palms and small villages with chickens and ducks running about and women sitting in small shops selling bottles of pink gasoline, though motorbike traffic was next to nonexistent. In the middle of the island, parched rice fields surrounded the trail which followed the old railway to the French bridge that connects Don Det with Don Khone. The railway was built in 1894 as portage for boats coming up the Mekong from Saigon as Khone Phapheng Falls would not allow vessels further despite several bold attempts to drive up the falls. At the other side of the French bridge on a plinth stands Eloise, one of the original locomotives saved for posterity. I headed left after the bridge down a dirt track through some palm-lined villages dotted with old French colonial buildings including a school and the heritage house at Sala Done Khone. Now a hotel, Sala Done Khone affords a great view of the bridge and channel. I ended up driving a remote track following the river. On this part of the island, you can see the massive concrete splitters offshore left by the French who would prepare the logs for transit. Heading to Khone Pa Soy I heard many fishermen could be found selling their catch but I ended up at a dilapidated suspension bridge across a chasm with a turbulent river below. Not daring to risk it on the bridge I continued to Hang Khone, the southernmost tip of Don Khone and the jumping-off point for viewing the rare Irrawaddy dolphins. Looking out to Cambodia across the water this is the last stop in Laos. Expecting to be approached for a boat trip to see the dolphins the only person around was a teenage boy sleeping on a hammock. Going back on the track I headed to Li Phi Falls, normally there is an entrance fee but they just waved me in. The Falls were well signposted and mapped and I walked the whole viewing route to the end of the path and back. Here the falls might not be as wide as Khone Phapheng but the many cascades were stronger and formed misty clouds. Butterflies and insects were abundant and I watched a pair of white egrets nesting amongst the rocks. Heading back to my guesthouse after a fantastic sunset, I had to prepare to leave. My trip was much too short. I could have done with a few more weeks, nay months.

The 4000 Islands area is a very special place. It’s the last trick up the sleeve of Laos before you reach Cambodia. It’s as if she’s saying “wait a minute you haven’t seen everything, look at this” and she shows you a royal flush.

Wat Phou reveals its true beauty and history for those who make time to visit. Tiny Champasak, gateway to a small...