A bite on the wild side Europe’s top tables, such as Noma in Copenhagen, have built reputations and garnered Michelin stars on the trend for foraged food and edible insects. But that won’t turn any heads in Laos; such food has always been part of the country’s rich culinary landscape. Intrepid eater Mick Shippen takes a bite on the wild side for Champa Meuanglao.

I have a confession to make. When I have western friends to stay in Vientiane, I like to take them to a Lao restaurant and, without telling them, order a large plate of fried crickets. After the initial surprise, the reaction goes one of two ways – occasionally my dining companion will tuck-in with only the slightest hesitation, but mostly it takes 10 minutes of persuasion before they will tentatively bite into the crispy thorax and abdomen of a short-tailed cricket, known locally as chi nai or nak hong tai din, which translates as “underground singer”. In truth, if you can overcome your initial reluctance to munch on a bug, I assure you that a plate of plump, deep-fried crickets, liberally sprinkled with white pepper, fried kaffir lime leaves, dried chili and fish sauce, make a very tasty accompaniment to the ubiquitous chilled Beerlao. If you are still not convinced, then I urge you to simply consider these tasty morsels as land shrimps!

In addition to being a delicious snack, crickets are highly nutritious and a rich source of essential macronutrients, protein, fat and carbohydrate. Indeed, a recent study by the Food and Agriculture Organization of the United Nations stated that Laos was among the world’s highest consumers of insects, and stressed the many benefits for health, food security, nutrition, and the environment. Such is the popularity in Laos of crickets, and numerous other types of insects, that they are not only caught in the wild but also farmed commercially, earning villagers a good income.

Laos is predominately a rural and unspoiled country and as such, foraged food has always been an important part of the diet. Ingredients such fiddlehead fern tops, yellow burrhead water iris, hummingbird tree flowers, and many other wild plants, leaves and herbs are liberally used in Lao cooking to create exciting flavours and textures. Foraged herbs are used in soups and curries, while a traditional dish called sup can be made from a wide variety of vegetables seasoned with pounded root ginger, shallots, chili and sesame seeds.

Next time you’re in a Lao restaurant or market, be adventurous. Take a bite on the wild side! Here are 10 edible insects and foraged delicacies from Laos’ wild larder that are worth discovering. Several types of cricket are farmed in Laos, making them the most common insect species found in markets. At 5cm in length, the short-tailed cricket is the largest field cricket in Asia. They live in burrows in the ground and the males produce a chirping sound when they are active at night, hence the Lao name nak hong tai din, or “underground singer.” Crickets are deep-fried and tossed with herbs and flavourings such as fish sauce, pepper and chili. Plump khai mot daeng and smaller darker coloured khai mot hai are the eggs of red weaver ants and a black ant, both of which nest in trees. They are without doubt the most popular food from Laos’ wild larder. The ants get their name because they construct nests by weaving leaves together to form a large ball high up in trees. Nutritious and delicious, weaver ant eggs are seasonal and available from January to April, but can be frozen for later use. Dishes include kaeng pa sai khai mod daeng let pak waan, fish soup with red ant eggs and melientha leaves, khua khai sai khai mot daeng, ant egg omelette, and goy khai mot daeng, spicy ant egg salad. These 4cm-long bugs, known as duang nor mai, are the caterpillar of the omphisa fuscidentali or bamboo borer moth, which, as the name suggests, lays its eggs in clumps of bamboo. In season from October to January, they are collected in the wild and raised commercially. Considered a delicacy, these protein-rich caterpillars are served fried and are a popular beer snack. Not all bug collecting is without risks. The larvae of the tree-dwelling giant hornet or tor daan and digger wasp or tor kum which often nests underground, are highly prized as food, but adult insects are extremely aggressive, making harvesting extremely dangerous, when they are pacified with smoke. As a result, the larvae command a high price when it is in season in June. They can be prepared and eaten in many ways, including steaming with egg and herbs. 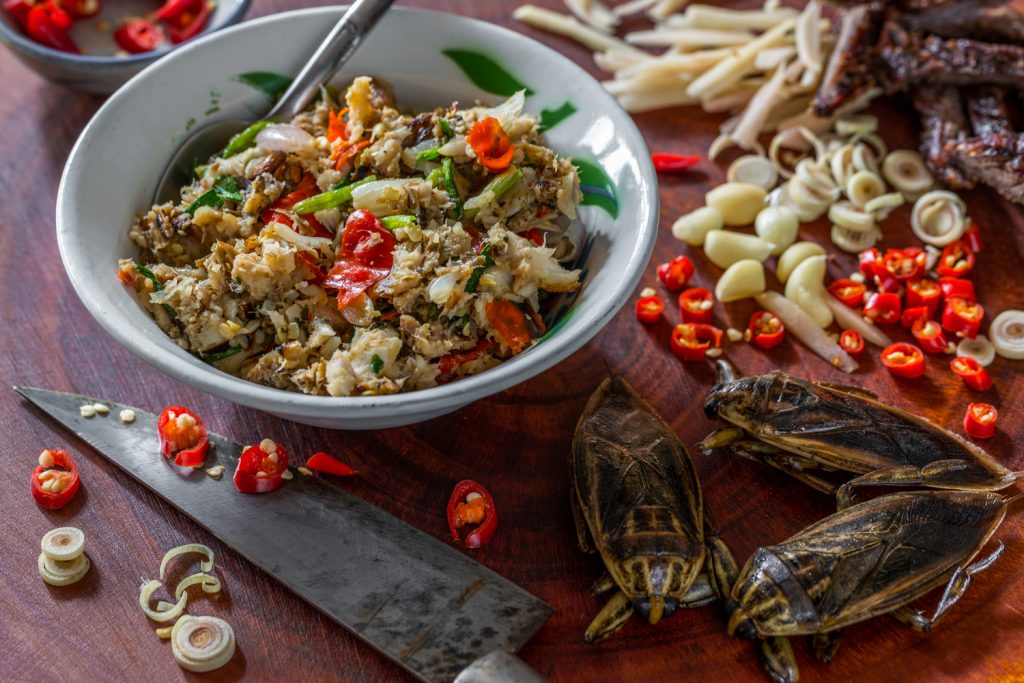 Maeng da are the most intimidating-looking of all the edible insects. And be careful if you are tempted to pick one up in the market; they will bite. The inner flesh of roasted maeng da can added to number of dishes, including a jaew dip in which it is mixed with grilled fish, herbs, and chillies, and pon pa, a fish and vegetable stew. The beetles have a strong fragrance and you may see shoppers in the markets smelling them to select the most aromatic bug! The flavour is very distinctive and must be tried. Known as meng keng in Lao, these colourful little bugs are collected from March to May or June. As a defence, they secret a rather unpleasant smelling liquid which can stain and burn the skin. Meng keng can be fried with herbs and kaffir lime leaves or made into a jaew dip. Numerous other insects eaten in Laos include dragonfly larvae, dung beetles, scarab beetles, red pal weevil and larvae, cicadas, and more. The hummingbird tree or is a source of beautiful edible flowers known as dok kare. Trees produce either vivid crimson or creamy white flowers, which are added to soups and curries such as gaeng pa sai dok kare, fish curry with hummingbird tree flowers. Fiddlehead fern or pak koot is a popular foraged vegetable which is available all year round. The young tender curled tops are used in a sup or yam, a spicy salad flecked with fresh chilis, herbs and minced pork. Yellow burrhead or pak gang jong is an edible water iris. The flowers and stems prepared at a sup, cooked with garlic, ginger, chillies, shallots and sesame seeds. It is a native of Mexico and here in Laos it is an invasive plant, so you will be doing your bit for the environment by eating it. The curiously named earthstar barometer mushroom is small leathery puffball-like fungus which is dug from the ground in May and June. This delicious and unusual mushroom has a complex earthy flavour and is served in curries or stir fried with herbs and chili. Khai pen is edible riverweed harvested from fast flowing rivers in northern Laos. After collection, it is washed several times to clean it. The weed is spread thinly on a bamboo frame in a process similar to making handmade paper. Thin slices of garlic and tomato, along with a sprinkling of sesame seeds can then be added and the weed left to dry in the sun. To eat, the weed is fried for just a second or two and served with jaew, spicy dips made using the holy trinity of charcoal roasted garlic, shallots and chillies, plus the addition of the star ingredient such as tomatoes, aubergine or mushrooms.

Where to buy edible insects and foraged food

In Vientiane, fried crickets and other insects can be found at evening food markets near That Luang, and at the junction of Hengboun and Chao Anou roads, and Ban Anou Night Market along Khun Bu Lom Road.

Most foraged vegetables sold in the markets are bought by home cooks. Very few restaurants have them on the menu. Exceptions include Doi Ka Noi in Vientiane, which serves a small daily changing menu, often featuring more unusual seasonal dishes, and Kualao restaurant, also in Vientiane. In Luang Prabang, Tamarind restaurant can offer an “Adventurous Lao Gourmet” menu for advanced bookings which includes some exotic ingredients.