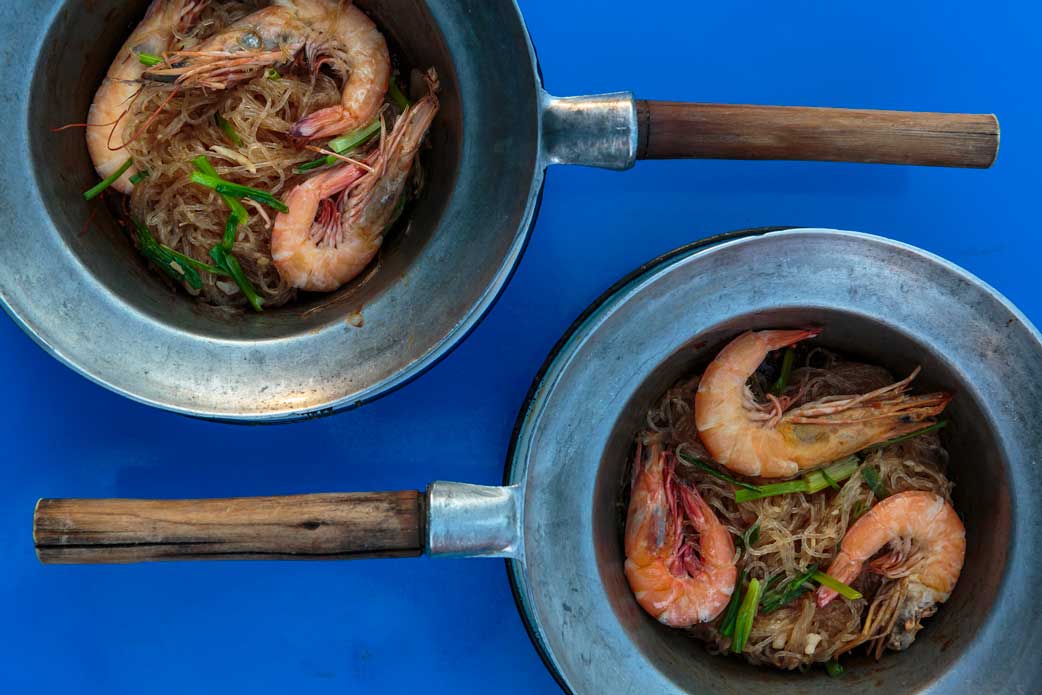 Thailand has often been described as a ‘food culture’, a statement that implies that food is more than simply sustenance but the centre of almost every aspect of the social life. Indeed, one only needs to wander down any Bangkok street to realise just how true that statement is. Almost everywhere, enterprising vendors have established regular pitches on the pavements throughout the city. Many specialising in one particular item, while others are able to turn their hand to numerous dishes. Yet they all have one thing in common; the food they serve is cheap, tasty and ready in minutes, the very definition of fast food. Whether you are looking for a quick al fresco breakfast, a full-blown lunch, a tempting in between meals nibble, dinner with friends, or something to soak up the ale after stumbling out of a nightclub, the street vendors have it all, and almost 24 hours a day. 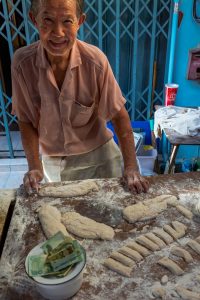 The availability of food and the mind-boggling range of delicious bites on offer are part of the very fabric of this vibrant city, making it a truly exciting place to dine. One of the most frequently heard greetings in Thailand is ‘kin khao yang?’, or ‘have you eaten yet.’ Thai people are communal diners and grazers, seldom eating alone and never satisfied with just one dish. After work, street stalls swarm with office staff and the air is filled with the irresistible aroma of stir-fried chilies, lemongrass scented soups and grilled meats.

Although the typical Chinese noodle or chicken and rice stall is still very much part of Bangkok’s culinary street scene, the majority of the street traders come from the northeast of Thailand, economic migrants from the hot and under-developed Isan. As part of the Asian tiger economies much of the Thailand’s boom time growth and investment during the early 90s focused on Bangkok, by-passing the rural areas. Resilient and hardworking, Isan people moved in droves to the big city to work as taxis drivers or as labour on construction sites, bringing with them there distinctive music, culture and of course, food.

Far from egalitarian, Thailand’s hierarchical social structure meant that Bangkok’s elite and middle classes dismissed Isan as ‘baan nok’, the back-of-beyond with language and culture strongly influenced by neighbouring Laos. In the not too distant past, it was rich coconut milk curries, the much-lauded royal cuisine or the food of Chinese immigrants that dominated the diet of Bangkok Thais. 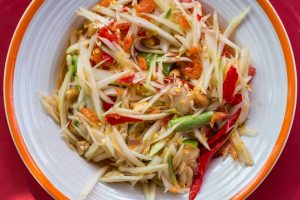 But as the labour came to build Bangkok so did their culinary skills and the adaptable Isan workers soon established streets stalls selling northeastern delights across the entire city. The simple yet fiery food proved a hit with everyone. Som tam, a spicy raw papaya salad, is the most well-known dish from the northeast, so much so that it is almost an institution. If anything could now be considered the national dish of Thailand, it is som tam. Made in a large pestle and mortar called a krok, som tam sellers pepper the streets of Bangkok, with the familiar pok, pok, pok sound made as the dish is mixed altering passers-by to their presence. Accompanied by the equally famous gai yang, or grilled chicken and sticky rice, a glutinous variety, steamed and eaten with the hand, Isan food is now a regular feature on restaurant menus. Indeed, Isan and Laos restaurants like Hai on Convent Road are packed day and night. 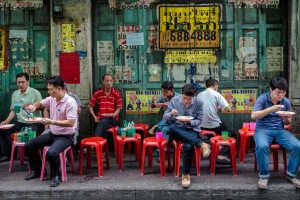 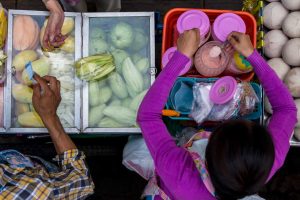 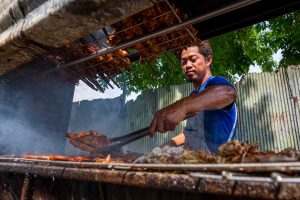 Street vendors provide a great service and create a very special atmosphere, not only within the environs of Bangkok but across the entire country. The price of food is kept low due to minimal overheads; most pay a small fee for their pitch to shop owners if they are in front of a business and a weekly backhander to the police. Vendors are such an integral part of Thai life it is hard to imagine the city without them. Bangkok authorities, who have said that they believe there to be more than 40,000 street stalls throughout the city, declared Monday to be a vendor-free day. It is when they are absent that you truly realize how much the city’s character is defined by these amazing roadside chefs. Yet their wonderful cooking and easy availability of cheap and tasty food is increasingly threatened by continued development and gentrification of neighborhoods. In recent years, campaigns by the authorities have attempted to remove them from certain areas, blaming them for contributing to traffic problems or stating that they are a nuisance for pedestrians. When international dignitaries visit the country stall owners are often banned from selling on the street in order to ‘clean up the city and create a good impression’.  Keen to enforce the rules and regulations that blight many western nations, the authorities seem oblivious to the fact that most visitors love to see and savour Bangkok’s remarkable street food. 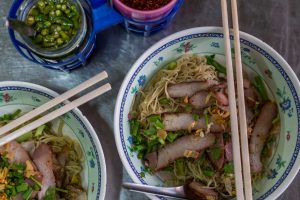 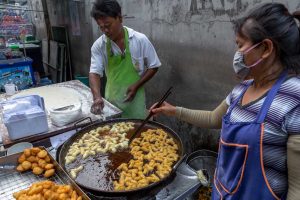 Dining street-side in Bangkok is an extraordinary experience, a feast for the eyes as much as it is for the stomach, and an essential part of any visit to this great city.

TEXT AND PHOTOGRAPHS BY MICK SHIPPEN

Reconnecting through food. The shared experience of preparing food and eating together binds us like no other. It...