In Search of Redemption 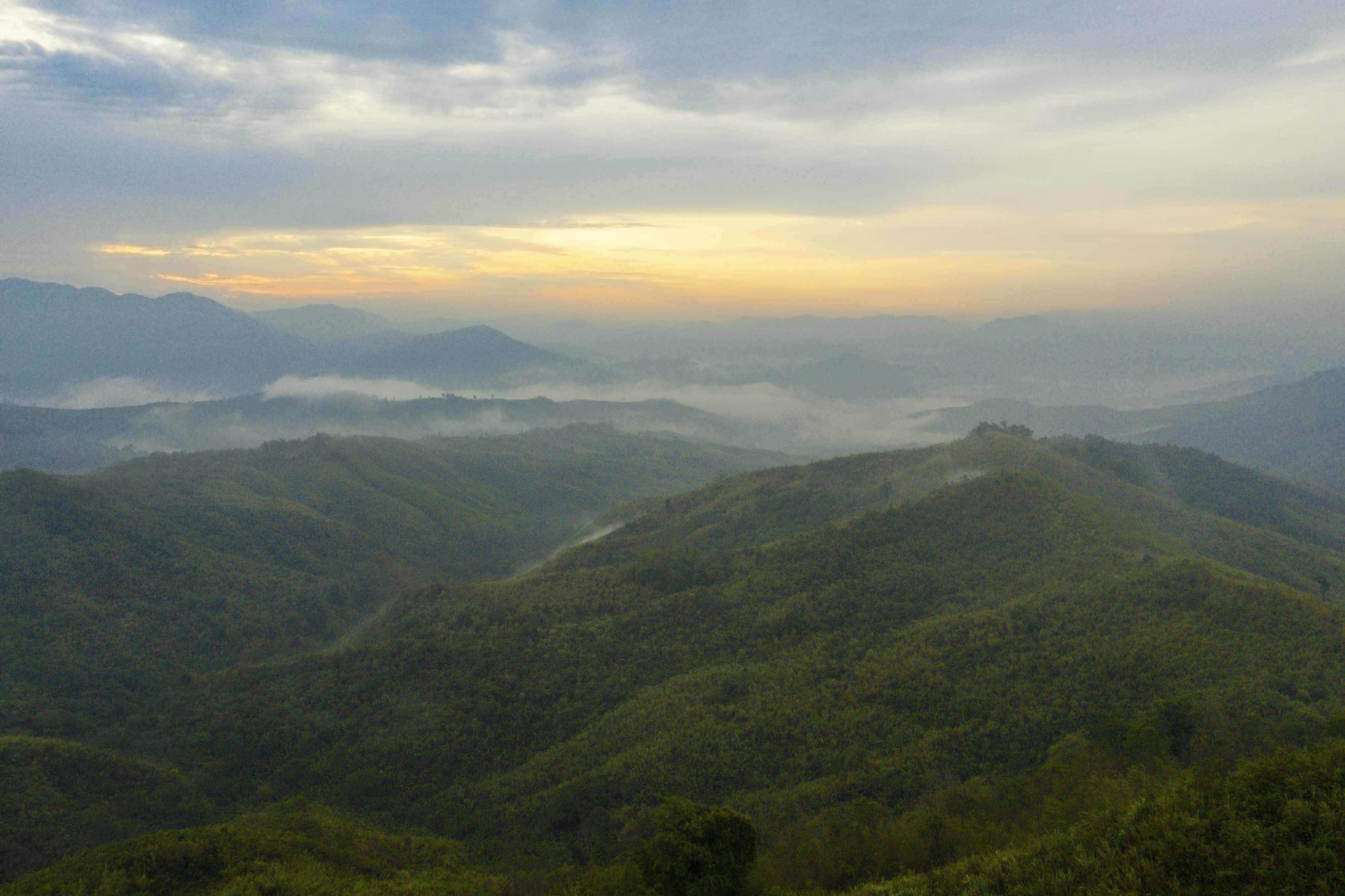 A BikingMan racer learns life lessons from the sidelines.

I pause to catch my breath. As I do so I am suddenly aware of the cacophony of noise around me, the shrill blast of insects hidden in the thick undergrowth growing ever louder, monkeys howling overhead and water cascading over rocks.

I have no concept of time, but figure it must be sometime in the afternoon as the sun is high overhead and a suffocating heat is closing in all around. Parched and out of water, I curse myself for not stopping when I had a chance to refill my bottle. A single thought goes through my head: “You’re not meant to be here.”

Every time I stop moving it comes back, a constant reminder. And there can be no arguing with the voice, because I’m not meant to be here. And what’s more, I don’t actually want to be here. Not Laos itself, but rather this particular corner of the country, lost and alone in the jungle. A branch comes crashing down, snapping as it hits the exposed rock just a few feet away from me. The surprise startles me, breaking my inertia as I grab my bike and continue fighting my way through the dense foliage, doing my best to free my mind from that nagging thought: “You’re not meant to be here.”

It had all started so well. Along with fourteen other cyclists, I had left the Sanctuary Hotel in Luang Prabang the day before, just as the first slithers of light crept over the horizon, turning the sky a murky blue. Each of us did so in a quest to complete BikingMan Laos, a 780 km self-supported race aimed at taking riders on a journey of discovery, both of this unique country, and also of their own minds.

As a veteran of BikingMan races I know that in order to complete them you need more than just physical fitness, you need a deep-rooted mental strength that can battle the demons, the voices lurking around every corner ready to convince you it would be easier to stop than fight on through dark nights and growing fatigue.

For those who want to compete at the front of these endurance races this is exactly what you must do, ride through the night when the voices are at their loudest, overcoming the ever-increasing urge to stop, to rest weary limbs and minds slowly losing their grasp on reality – it’s not unusual to start hallucinating after 500 km without sleep.

But there would be no hallucinations for me, just a series of recurring nightmares as my mind played cruel tricks on me. A series of mechanical issues had left me with no choice but to abandon the race with barely 150 km ridden, a decision made all the more painful and frustrating given there was nothing I could do about it.

Months of training, sacrifice and effort for nothing, my race was gone and in its place a feeling of total emptiness as I set about getting back to race headquarters at Sanctuary Hotel. I woke the next morning in a cold sweat, unsure of my surroundings. Was it all just a bad dream? Sadly not. The reality hit home as I sat watching the other riders dots move around the live race GPS tracking map. That’s when the voice started.

“You’re not meant to be here,” it reminded me.

“I know that, but what am I meant to do about it?” I snapped back.

“Move. Get out of here, away from everything.”

The conversation went back and forth until I could no longer bear it, I grabbed my bike and set off in search of a mechanic who could fix it. I had come to Laos to ride my bike, and that’s what I intended to do. It might not have been as a part of the race anymore, but that would not stop me from creating my own adventure.

With my bike finally fixed I set off from Luang Prabang once more, only this time I had no direction and no sense of purpose, but it didn’t matter, simply being on my bike was enough, to have that sense of freedom that comes with cycling. So long as I kept moving I would be ok, at least that’s what I thought. But there was a problem, a little voice kept telling me to see what was happening in the race.

I felt like an addict wanting another fix, even though I knew it wasn’t good for my mind, yet ultimately giving in to the craving and periodically checking the live GPS tracker. I’d find myself standing at the side of the road, squinting at my phone screen trying to decipher who was where on the map. It wouldn’t take long before I felt the familiar pangs of pain, and with it that damned voice, always there to remind me that I should be one of those dots.

“You’ve got to keep moving” I told myself. With every subsequent turn of the pedals the pain and disappointment would slowly fade until eventually my mind was free from thought. In its place a growing sense of happiness that took me by surprise given how much the race had meant to me, and how raw the emotion was when I was forced to abandon. Freed from the stress of racing I could now at least venture wherever I desired. Ahead of me a dirt track lead away from the side of the road, across an archaic looking wooden bridge and into the jungle. Curiosity got the better of me as I swung off the main road and onto the dirt track, which, once over the bridge, soon dwindled into little more than a path trodden into the baked earth.

It didn’t take long before a growing sense of doubt crept into my mind. I was lost. Where there was once a path to follow, now there was nothing, just a seemingly impenetrable wall of trees and plants. I fought my way through them, all the while ho-
ping, praying that there were no snakes lurking.

I eventually found my way into a small clearing, from where I could see the top of the hill I had been battling my way up.

It didn’t take long for my mind to wander back to the race, that was until a branch came crashing down next to me, sparking me into action and headed for the brow of the hill. I must have absentmindedly strayed off course at some stage, because from my vantage point at the top I could see the path below, emerging from the trees and leading to a vast river. I could make out children playing on the banks as men in small canoes cast fishing nets into the muddy brown water. 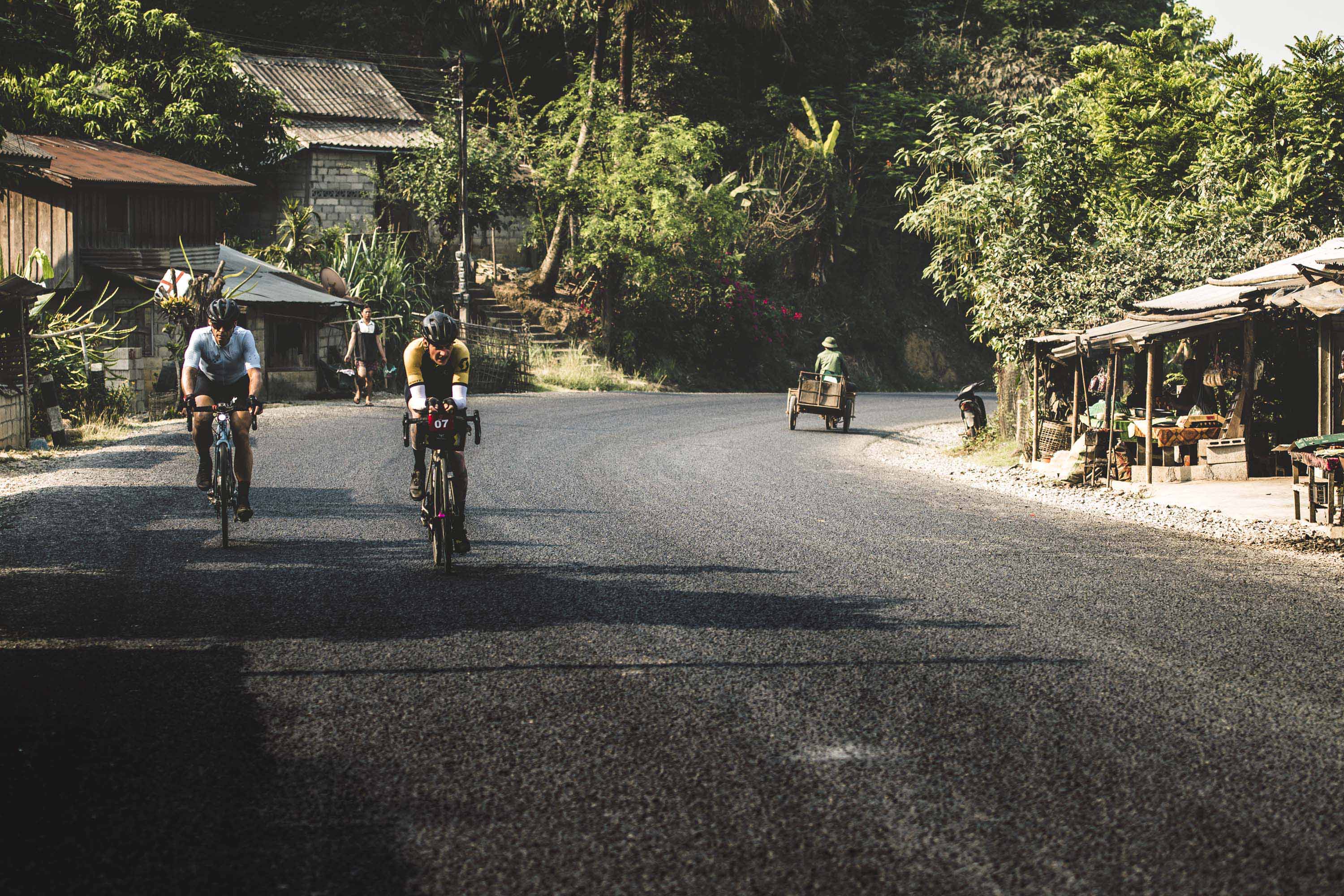 Having finally made my way back down to the path I took a moment to sit by the river, to observe life all around me, one of total contrast to my world at home, but one that reminded me happiness often comes from the simplest things in life. A sense of gratitude washed over me, to have been able to enjoy this experience, one that I would never have had if I was still racing.

The following day the riders began to finish, first Jason Black, who won after a tense battle with BikingMan debutant Michael Duane, and then later, under a cloak of darkness, local rider Thavone Phonasa, greeted by a crowd of supporters, myself included, holding flowers and Lao flags.

To finish third is impressive enough, even more so when you’ve never ridden an ultra-distance event before. But then we never know what we are truly capable of until we push ourselves to new limits, and by the look of utter exhaustion on Thavone’s face it’s clear he’d done exactly that. Over time more riders arrived, some finishing, others having abandoned, but all with stories to tell. My story might not have been the one I had wanted it to be, but ultra cycling has a funny way of teaching us lessons that ring true in life. With time to reflect on my experiences I came to realise that not everything in life always goes to plan, and we can either keep pedalling, or we can simply sit by the side of the road and watch as life passes us by.

BikingMan hosts ultra-distance cycling events around the world. The first event in Laos was held in May.
See their website for
details on upcoming events: bikingman.com

The Secret Lives of Islands

Tropical islands are curious places, symbolizing for many the ultimate escape – abandoning everyday life for lush,...