Or laam: a dish fit for a king 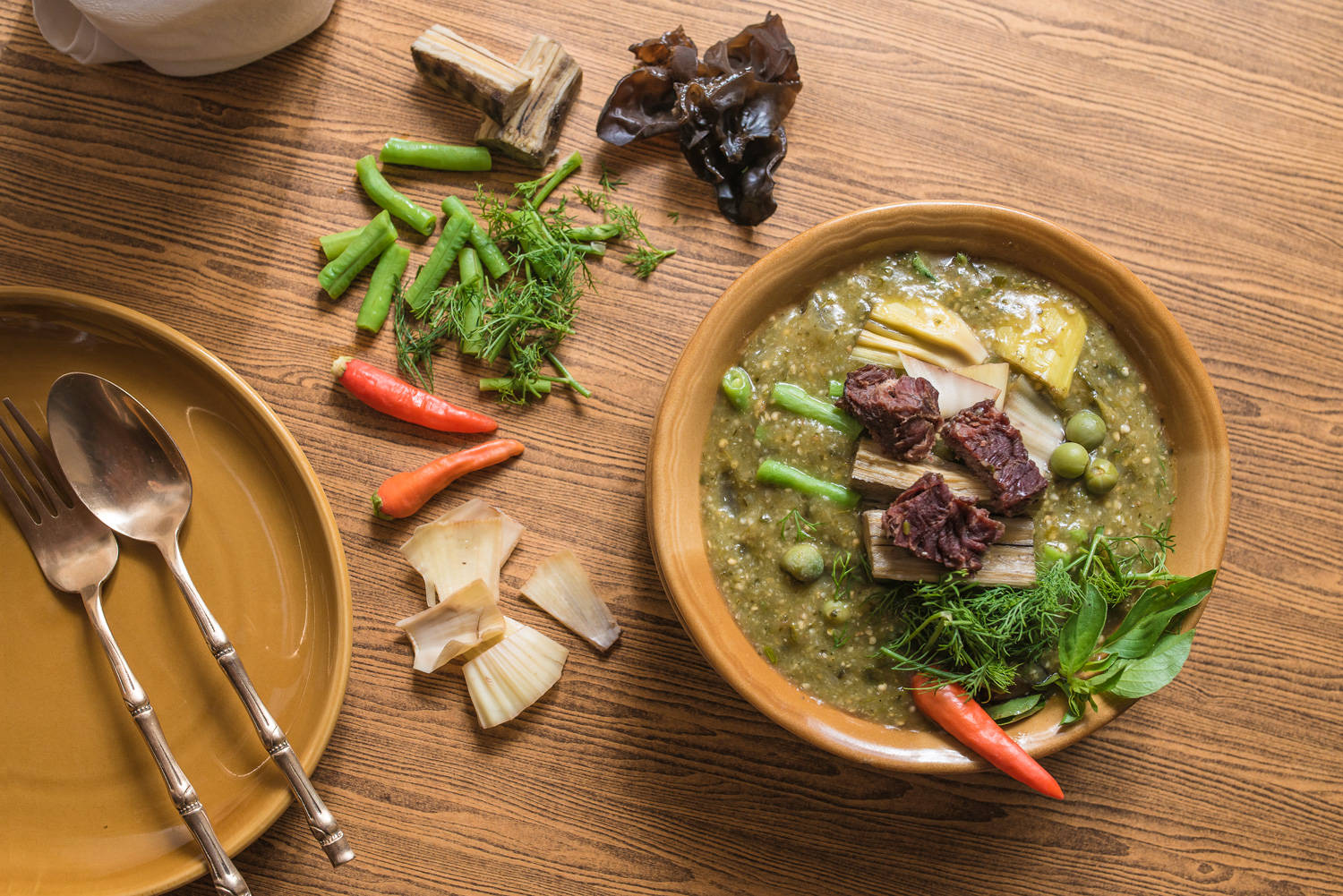 This famous Luang Prabang dish has its origins in the kitchens of the Royal Palace, and it’s still enjoyed in Laos today by all.

It wasn’t an easy job, being a Lao king. Imagine the discomfort of having to dress in the finest silk and adorned in the purest gold in an air-condition-less era in one of the most humid places in the world. Imagine the burden of wandering around the royal gardens anticipating the next invasion from warring neighbouring armies, monitoring the tributes that vassal princedoms had to pay, balancing the complex power-hungry factions of the court, and last but not least having to select a politically agreeable husband for your daughter.

But even with the weight of the kingdom on his shoulders, a king still has to eat. We do not often think about that vital and much-anticipated interruption – the queen calling him in for an elaborate supper. One that took many hours to make, and, in Laos, almost certainly featured Or Laam.

Like many traditional Lao dishes, Or Laam is made from simple ingredients that have been available to local people for as long as anyone can remember. And, like many Lao dishes, the secret to Or Laam’s distinctive flavour and texture is mired in the country’s long history.

But the famous Luang Prabang delicacy differs from many other much-loved Lao foods in that it is, quite literally, a dish prepared for a king.

Centuries ago, and even as recently as the 1940s and 50s, rural populations in northern and central Laos often ate what has become known as ​Or​ – small amounts of meat stewed in large amounts of vegetables. The meat was usually whatever had been caught that day which also had to be bulked up – for nutrition as much as meat scarcity – with as many vegetables that came to hand, with the dish varying in ingredients from village to village, province to province.

But when it came to cooking for the royal family, no expense could be spared, both in terms of time, and the quality of the ingredients. The country’s finest chefs discovered that meat that was already cooked – grilled or sun-dried – was far more fragrant and flavourful when it was boiled than fresh meat, preferably for at least two to three hours at a time. And it was only after years of culinary trial and error did the chefs come to the realisation that when added to the stew, another ingredient, pepperwood (known in Lao as ​sakkhan​), created another wonderfully magical aroma that gives Or Laam its title as the dish of kings.

If planning Or Laam for the King’s supper, the kitchen staff would usually begin preparing the elaborate dish around noon – selecting the dried or grilled meat, and boiling it with vegetables including eggplants, yardlong beans, black-ear mushrooms, lemongrass, chilli and pepperwood. It is a dish that, for centuries, was synonymous with luxury, requiring the means to source the very best ingredients and plenty of time in which to prepare it.

It is, in other words, a dish fit for a king, although today, many traditional Lao restaurants serve it. The Champa Meuanglao Editor’s choice is the version served up by the Vientiane institution Kualao, a much-loved restaurant housed in a beautifully restored, yellow-walled French villa in the city centre, close to the equally iconic That Dam stupa.

Great food and an amazing view is no tall order. High above Vientiane, atop one of the tallest rooftop restaurants...