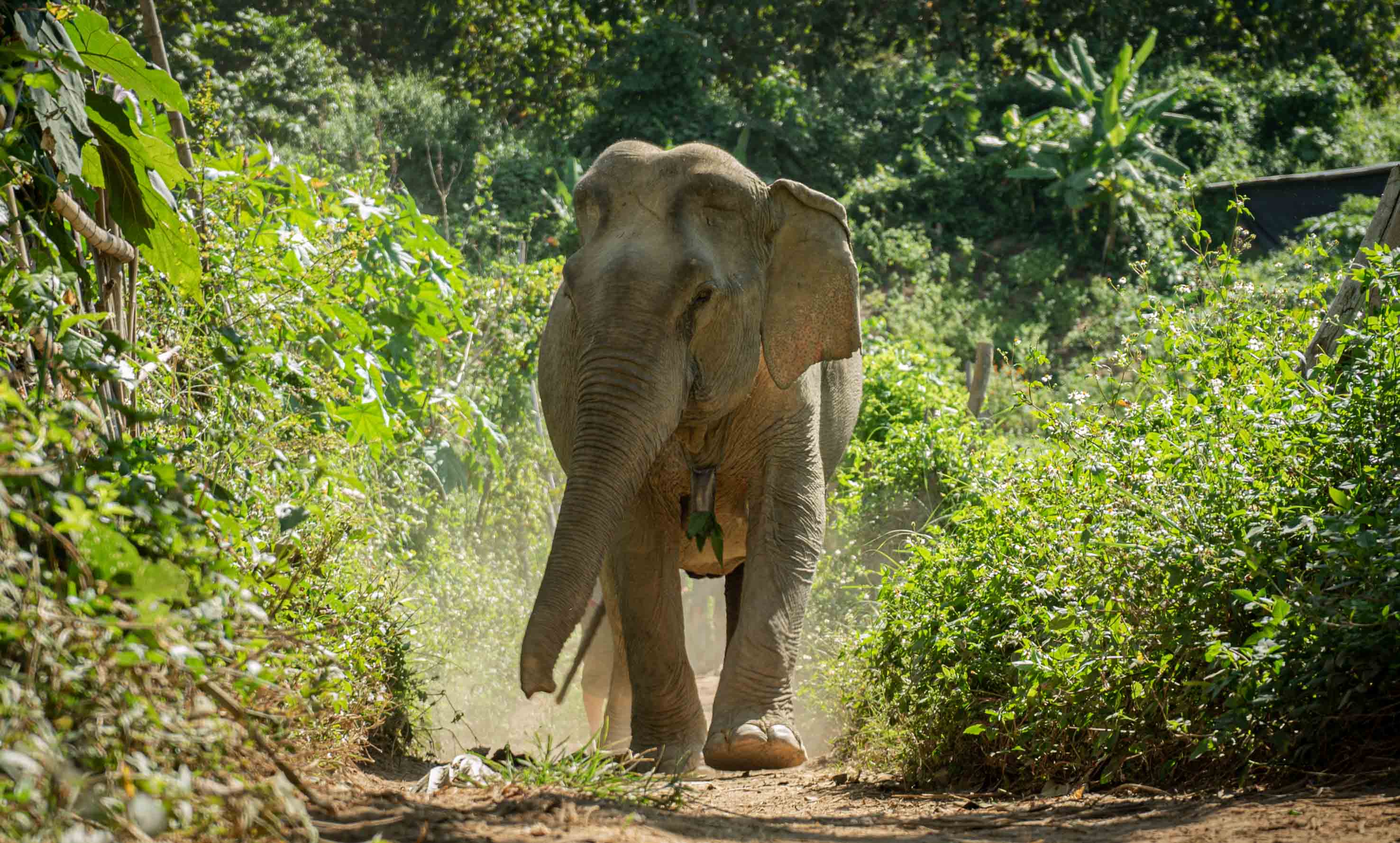 The historical symbol of Laos gets a brighter future

In a tangled teak forest, a short drive from Luang Prabang, I cross a cold mountain stream behind a giant matriarch elephant and a trailing tot. Majestic Mahn leads the way through trickling water ahead of four-year-old baby Kit.

I pinch myself. I can’t believe I’m so close to these jungle-munching creatures as they wander the forest foraging for breakfast.

Baby Kit hesitates when he sees the babbling brook, retreats, pushes ahead, and then bumps around for a different route, scattering his human observers while he searches for the confidence to pass. It’s a magical experience to watch this small pachyderm on a learning curve.

Kit is one of thirteen Asian elephants (and the only youngster) living on the banks of the Nam Khan River who are getting a new and happier lease of life at MandaLao. Set up by American Michael Vogler, and co-founders 5 years ago, MandaLao’s elephants have been rescued from logging camps and are being shown a new future without backbreaking work, and tourists riding on their backs for laughs. MandaLao offers wildlife fans a range of walks and ethical encounters all within easy access to Luang Prabang. 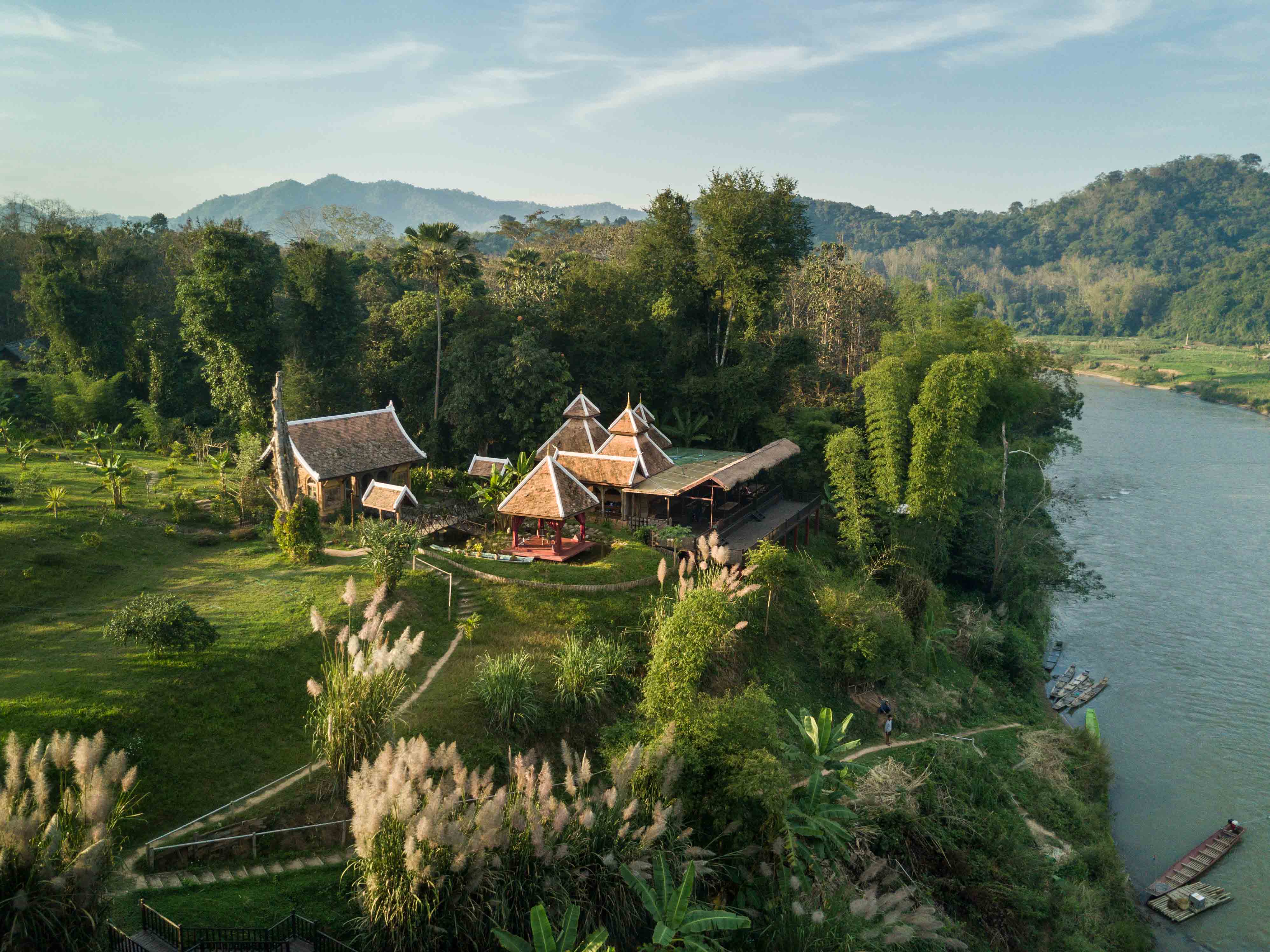 Guide Mr. Keum tells our small group at MandaLao’s riverside location that when the Lao government shut down logging camps in 2016, the elephants were out of work. Today they live in a “five-star hotel,” Keum says, while showing us photos of the elephants prior to their welcome at MandaLao.

Vogler’s ultimate aim is to send those captive elephants who are able to survive in the wild to a National Biodiversity Conservation Area (NBCA) in Laos in a bid to ensure the species’ survival. Once known as the Land of a Million Elephants, Laos now counts less than 800 wild and captive elephants with numbers declining due to poaching, hunting, illegal wildlife trade and unexploded ordnances.

“We can’t bring back one million,” Keum warns, “but we hope to increase the population to six or seven thousand.”

After a safety briefing and a tip from Keum: “We can kiss the elephant but not the mahout guide!”, we cross the river on a canoe to meet some of the waiting, and hungry elephants.

Thong Khoun, a 47-year-old female, is eager to snaffle the bananas we’ve brought her. When our attention is turned to other stabled elephants in the group, I spy her determination: she draws out her trunk as much as is physically possible and tips over a basket to snatch the last few bananas. I was transfixed. I couldn’t believe she was able to stretch her trunk so much.

Our elephants, tails swinging, set off and we trail them, led by guide Mr. Dao who walks us into the “elephant supermarket”, the 200 ha of riverside forest, filled with flitting butterflies, which MandaLao rents from local farmers. The pace is unhurried as the elephants seek out leaves, herbs, and bamboo, stripping the forest like untamed bulldozers. We pad softly over the leaf carpet, so the sound of the forest being ripped up by elephant trunks is intriguing and alarming.

Our group sticks to the path, stepping over elephant-sized prints planted in the mud, and piles of turd, but the elephants don’t give a damn about footpaths and wander all over the place farting and looking for their favorite snacks – a time-consuming business: elephants munch 250 kg of plants a day, drink 200 liters of water, and dump 90 kg of poo. Herd matriarch Mahn stopped in her tracks and we watched her scratch the earth with her trunk, suck up the soil, shower herself with dust, then curl up her trunk like a snail shell to yank down a creeper. We’d call it multitasking, I guess.

At the end of our trek, we posed with the older females for pictures and boarded our boat back to basecamp. Over lunch of beef, vegetable curry, and fried spring rolls, we shared our favorite bits and pics from the walk.

“Kit is the first baby raised in Laos that won’t go through the traditional breaking process of putting a three-year-old elephant in a ‘crush’ cage to break its spirit,” Vogler tells me. Kit sure looks happier and bouncier for it.

“The development process is similar to humans and Kit has six commands,” Vogler says. “He’s basically a 1200 kg toddler. One minute he is watching a butterfly, the next he is ripping up a forest.”

MandaLao’s ultimate goal is to get Kit, fathered by a wild bull, and other elephants in captivity back into the wild. MandaLao works with Prasop Tipprasert, founder of the pioneering Thai Elephant Conservation Center, and with the World Wildlife Fund in Laos, and is developing ideas including a potential new ecotourism product with the aim of ensuring a brighter future for Elephas maximus in Laos.

MandaLao is located 15km outside of Luang Prabang, but you can make reservations at their office downtown.
See their website at mandalaotours.com for more details.

Many travellers are surprised to find that Vang Vieng, the tourist hotspot and stop-off town on the way from...

How a Self-Trained Cartographer Made the Best – and Only – Maps of Southern Laos Following the trails of mapmaker...