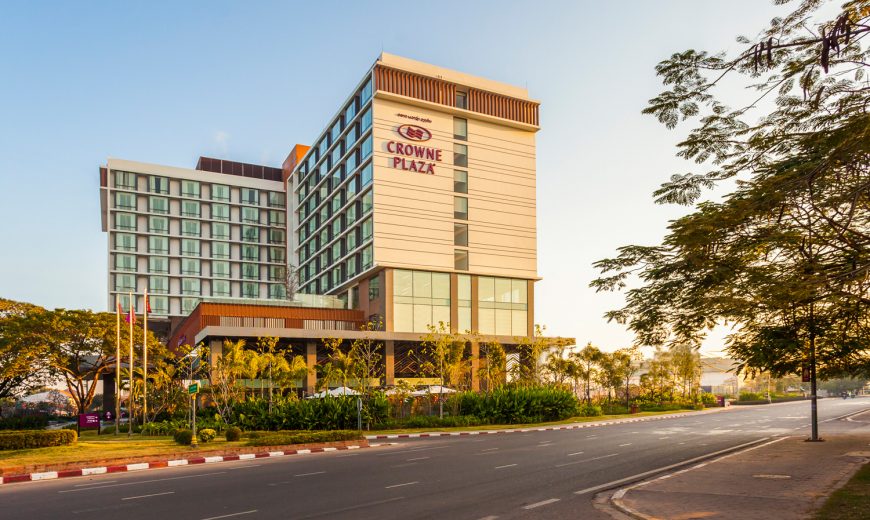 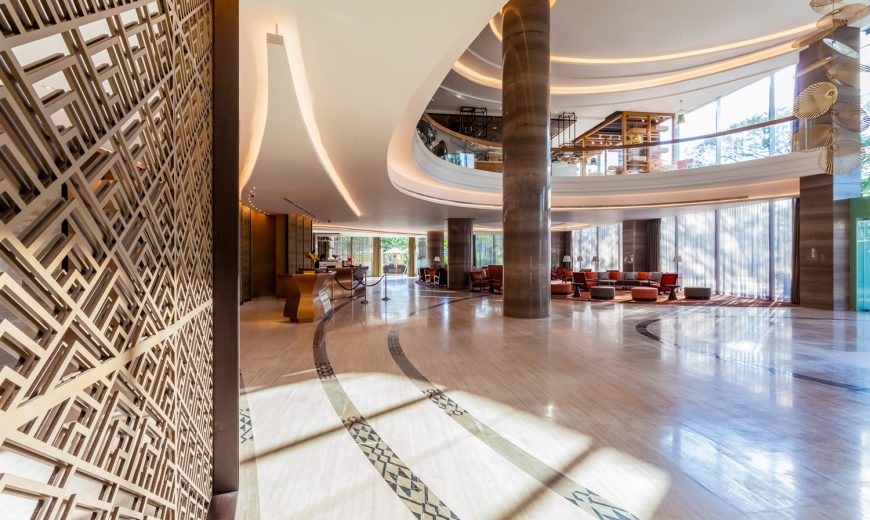 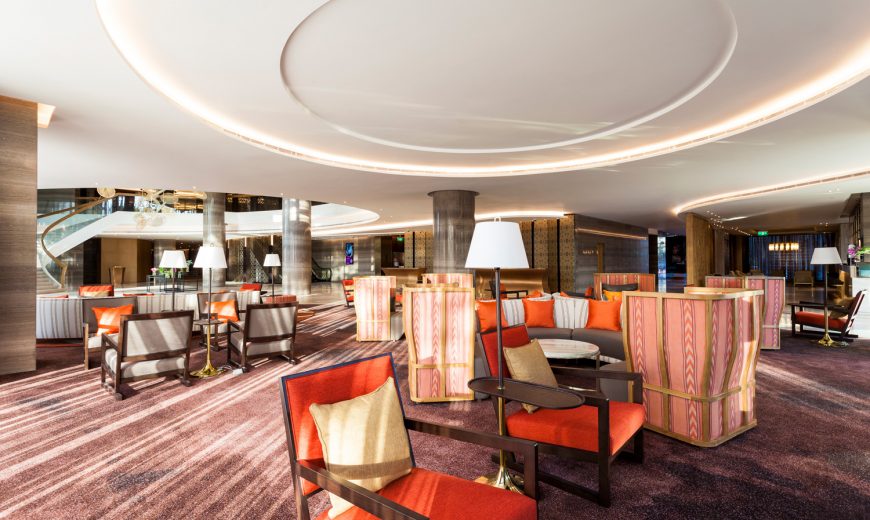 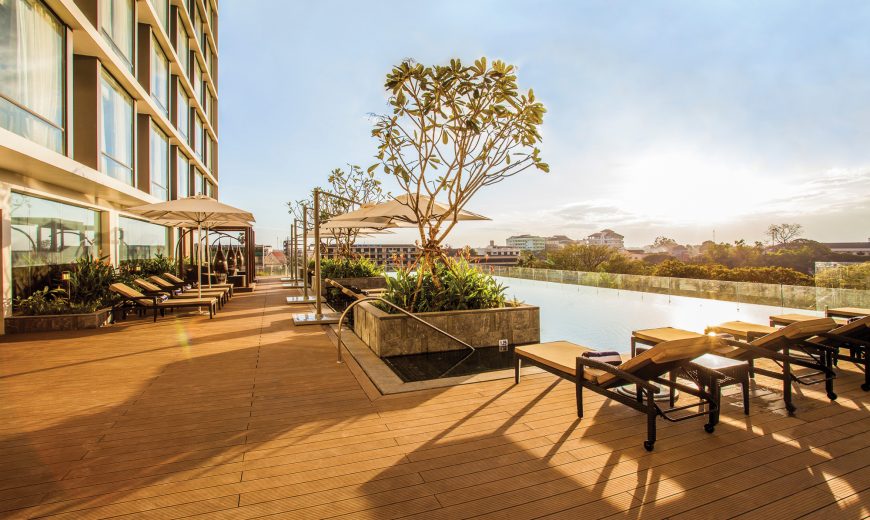 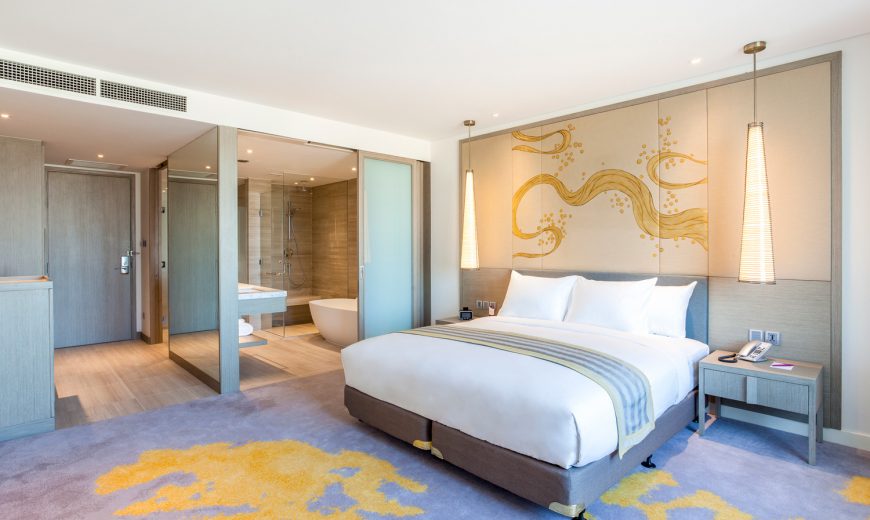 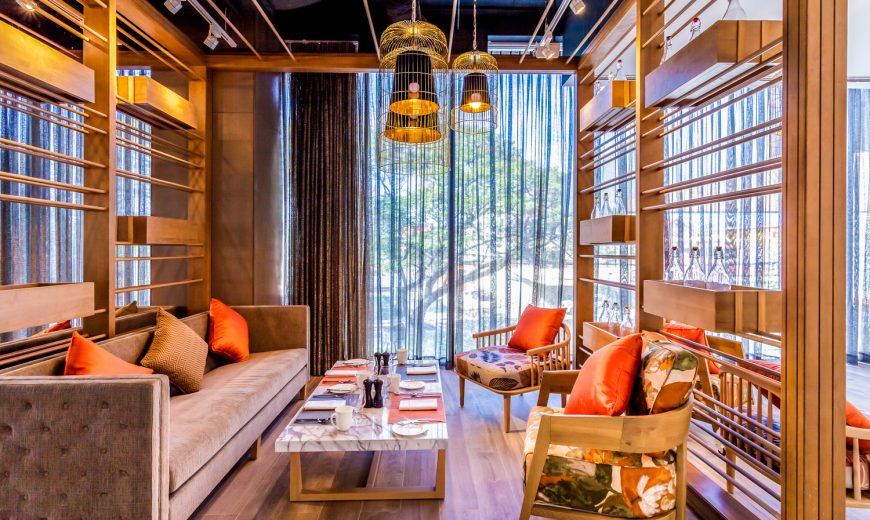 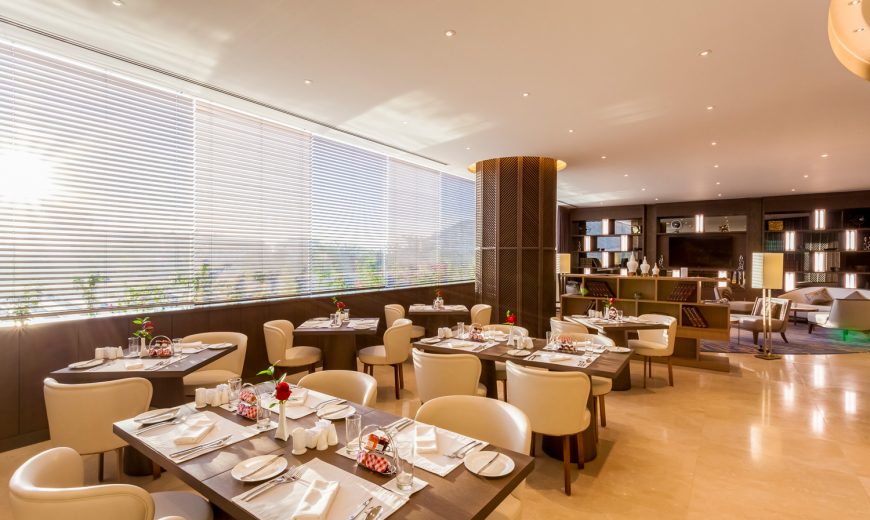 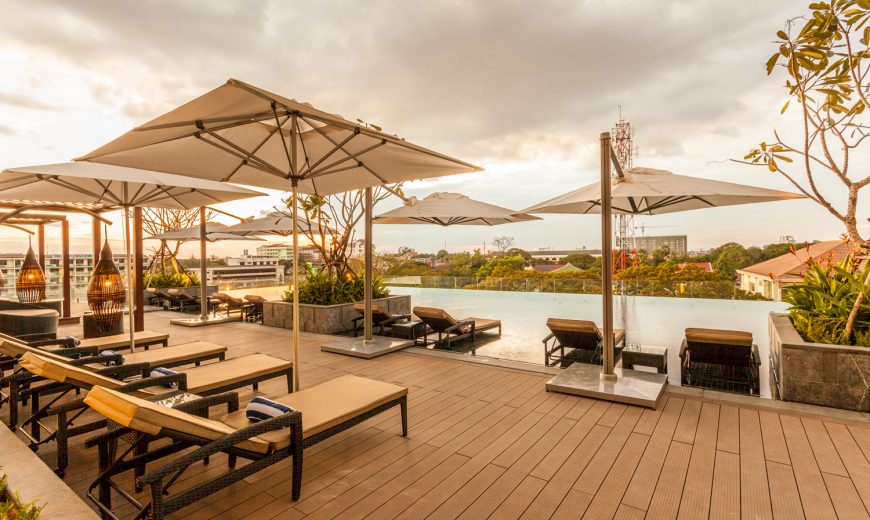 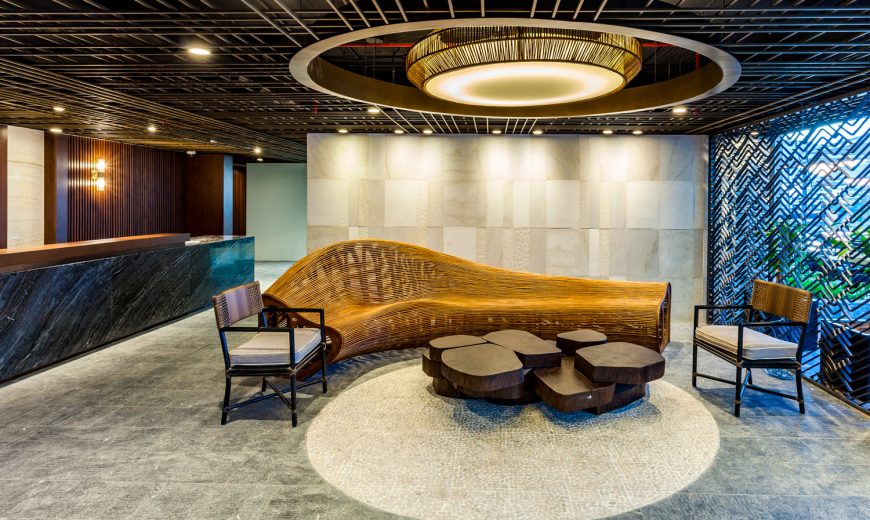 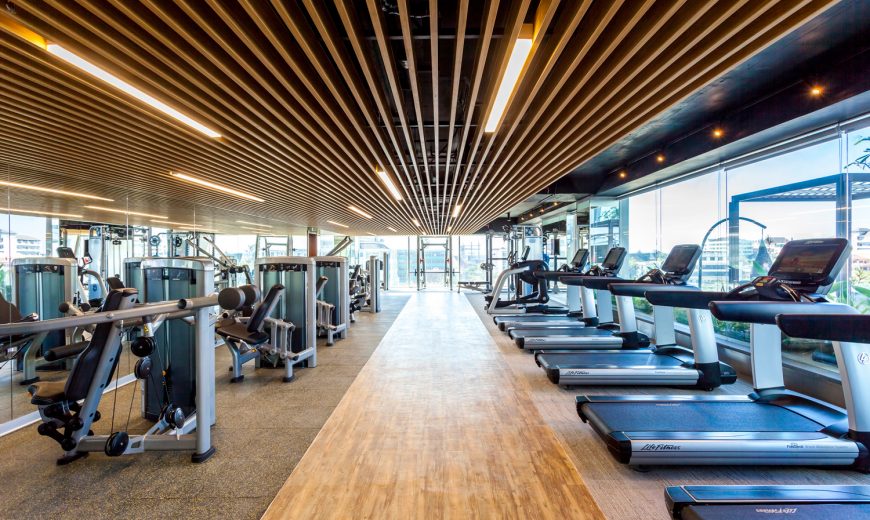 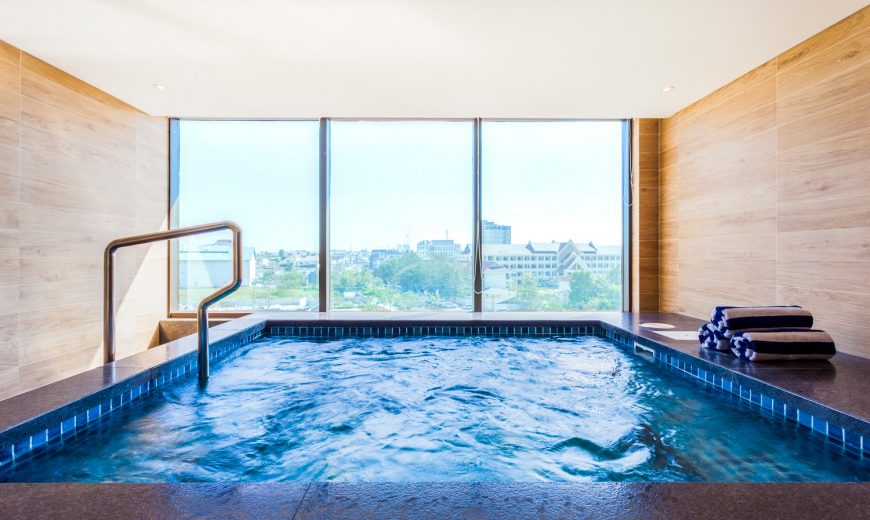 Sally Pryor tries out Crowne Plaza – the latest luxury hotel to arrive in Vientiane – and is mightily impressed.

It’s a muggy and oppressively hot Saturday afternoon in Vientiane, but in the hushed, carpeted corridors of the Crowne Plaza Hotel, there’s no weather at all. Nor are there any intrusive sounds, or smells. Just a soothing, clean, crisp-sheet atmosphere that is both refreshing and, to a certain type of traveller, ultimately familiar.

In fact, if you don’t happen to glance out of any windows, you could be in just about any big city in the world – Sydney, Hong Kong, Washington DC, Paris. All branded hotels like this look, smell and sound the same, the world over, and that is exactly what the Crowne Plaza’s ideal guest expects when they check in. Even in Vientiane. Even if they last checked out in Istanbul.

None of this is a disparagement, and Oliver Horn, the hotel’s general manager, doesn’t take it as such. In fact, the muting of a city’s local charm can only mean that the hotel is reaching the highest international standards. And this is what the hotel’s target clientele expects.

“Crowne Plaza is a brand that is mostly targeting business travellers and those leisure travellers who want the ‘safety’ of a brand, who want to know what to expect,” he says.

“If their experience has local flavour, then great, but this is not what our target guest is looking for – they are looking for the predictability of a branded experience.”

“Despite that, we actually do have quite a few references to Lao culture in decoration, uniforms and design, but we deliberately did not make them too obvious – the team is proud to introduce them and open up the culture to those guests who are interested.”

And that is exactly what they’ll get if their room looks anything like ours, which of course it will, because all the rooms must be similar. The colour scheme is neutral, the décor tasteful, the towels fluffy, and the bedding as crisp and white as newly fallen snow – there’s no other way to describe it when you live in Vientiane and all your whites have long turned ecru or eggshell (or whatever other shade name most lessens your frustration). Even the shower is a glory – two huge faucets to choose from that each release a deluge of perfectly steamy water.

The pool is another story. Ah, the pool. Situated on the third floor, it’s a gleaming turquoise oasis that sits at roof level. We sit in the swim-up bar – lounge chairs actually stationed in the water – and order drinks and food, frolic in the water which, as you would expect although you somehow fail to notice it at the time, is neither too hot nor too cold – and wrap ourselves in large, blue-and-white striped towels between dips. The chairs are all positioned to face the sunset, which, in Vientiane, is uniformly spectacular. As we lean back and take it all, it strikes me that we could be watching it on a cinema screen, so removed does the pool feel from the rest of the city. Even the air – so dusty, smoky and distinctive in Vientiane – feels neutralised.

The service is notable – very notable – for its hotel-brand efficiency. I barely need to introduce myself at the desk, when I’m instantly made to feel like everyone’s been waiting for us. When we discover the room doesn’t quite allow for all four of us, a brief phone call later and there’s a knock on the door and another bed made up within minutes. And when our over-excited young children run amok throughout the vast dining room come dinnertime, the staff are both solicitous and delighted – both keeping an eye on them and assuring us that nothing – not even badly behaved offspring – is a problem.

This smooth operation is no accident – not in a developing country like Laos. The country has long been a “white space” for IHG, Crowne’s mother company, but to have the hotel finally open here is a significant step for Laos, if not a coming-of-age signifier.

“We also strongly believe that the country has tremendous growth-potential; the GDP growth was stable across the last couple of years and we believe this will continue,” Horn says.

“Generally, it can be said that once the first brand arrives, others will follow – so from that point-of-view, we are happy to be a catalyst.”

He has worked for IHG all over the world, but plans on staying put in Laos for the moment, as plans for another “really interesting project”, take shape right next door
But for the moment, in practice, the hotel’s emphasis on consistency means some serious investment when it comes to staffing quality, and Horn confirms that staff training was a top priority when developing the hotel; the hotel’s investors spent $250,000 in training personnel during the “pre-opening phase”.

“Being part of an international brand means that we have substantial training resources at our disposal,” he says.

“We had trainers here from our sister hotels in Thailand and many of our colleagues went and experienced other Crowne Plaza Hotels in South-East Asia as part of their training. The biggest thing, however, is that the leadership team is not hiding in their offices but that we actively seek guest contact and listen to our teams every day.”

Indeed, all the staff – touchingly – know and refer to Horn by his first name, another deliberate touch on Horn’s part. Keep staff happy and close, and guests will reap the benefits, no matter where they’re staying.

The local flavour that some guests seek can be had, inevitably, at the vast buffet in the first-floor dining room where, tucked in amongst the meatballs, potato gratin and ratatouille, you can find a very, very good Or Laam, a traditional dish from Luang Prabang. Alongside a carefully curated wine list – we opted, predictably, for the Australian Shiraz – you can also indulge in the traditional Lao dessert of nam varn (water sweetened with sugar and coconut milk, and heaped with jellied fruit and grains), but I couldn’t possibly have walked past the visually splendid array of fancy petit-fours without partaking. Best cream-puff ever – sorry nam van.

Similarly, at breakfast, croissants and granola are plentiful, alongside pho and baguettes. We had been oscillating between heading down for another swim before eating but outside, the storm that has been building for days finally breaks, and the rain beats against the windows as we go for seconds and thirds of all the massive buffet has to offer.

It’s as though Crowne Plaza – in its mission to make us feel as comfortable and free from stress as possible – has even contrived to have the weather make up our minds for us. Anything’s possible in a place like Crowne Plaza – you only have to let the staff know.

[:en]Fun after dark: Walking Street is bringing a quiet part of the Mekong riverbank to life[:la]ບັນຍາກາດ ອົບອຸ່ມຍາມແລງ ທີ່ Walking Street[:]

The secret of business is finding a niche and filling it well. For Soutchai Travel, this means facilitating travel...

Two female artists are finding their voice in Vientiane Olé Viravong Scovill was just seven years old when she...