Discover the amazing wildlife that Laos has to offer

The Annamite Mountains, which extend from northern Vietnam along the border area with Laos and south into the border between Laos, Vietnam, and Cambodia, is one of the richest regions of the world in terms of its fauna, flora, landscape, and cultural diversity. In Laos, the Annamite Mountains lie to the east of the Mekong River, along the Lao-Vietnam border, from the province of Bolikhamxay in central Laos to the Attapeu in the south. It encompasses landscapes as varied and impressive as karst formations, dense mountainous dry and moist evergreen forests, and coniferous forests.

All these habitats are particularly well-represented in Khammouan Province and particularly in the Nakai-Nam Theun National Park, the Hin Namno National Park, and the Phou Hinpoun National Protected Area where several eco-tourism tours are offered. Indeed, Khammouan is a famous tourist destination for Lao nationals as well as foreign visitors in search of outdoor adventures, discoveries, and breathtaking scenery. The Annamite Mountains hold an extraordinary diversity of animal species that are found nowhere else on earth. These species are difficult to observe in the wild and therefore are not well known to the public. But they are highly threatened by extinction; indeed, all the species found in the Annamite Mountains are hunted out from forests due to the high demand for the illegal national and international wildlife trade, destined to bushmeat, traditional medicine, pets, or status symbol trophies. Therefore, they deserve to be put in the spotlight for their singular beauty and intrinsic value: they represent the natural heritage of Laos. 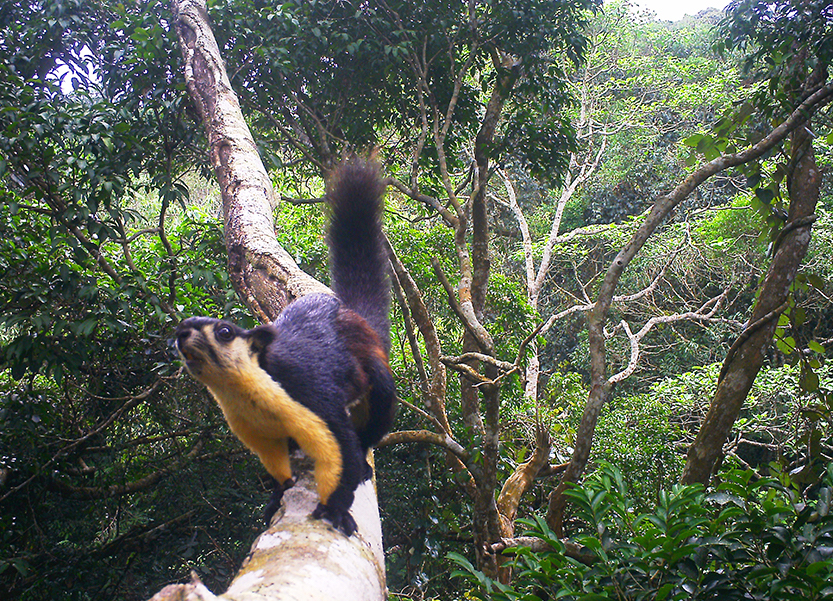 The Red-shanked Douc (Pygathrix nemaeus) is a monkey species often referred to as one of the most beautiful in the world due to its bright colors. The species only occurs in the Annamite Mountains and its largest population is found in Laos.

The White-cheeked Gibbon (Nomascus siki) is a primate species found only in the Annamite Mountains. It lives in family groups of three to five individuals composed of a yellow-furred mother, a black-furred father with bright white cheeks, and the young ones (their fur coloration changes several times before they reach adulthood). Gibbons are known for their characteristic beautiful and mesmerizing duet songs that members of the family produce every morning at dawn to reinforce their bond and inform neighboring groups of their territory. The Large-antlered Muntjac (Muntiacus vuquangensis) is a species of deer that was only discovered by the scientific community in 1994. It owes its name to its particularly large antlers and larger body size compared to other muntjac species. The largest population is found in the Annamite Mountains of Laos.

If you travel to the Annamite Mountains, you should also be aware of the Saola (Pseudoryx nghetinhensis). The Saola is a bovid species, closely related to wild cattle, and is one of the most remarkable mammal discoveries of the twentieth century, first discovered by scientists in 1992 in the wet evergreen forests of the Annamite Mountains of Vietnam and Laos. Today, very few individuals remain in the wild. Other species found nowhere else on earth is the Annamite Striped Rabbit (Nesolagus timminsi) or the Owston’s Palm Civet (Chrotogale owstoni) both as unique and fascinating as all the others.

All of these species provide just a glimpse of the faunal diversity of the Annamite Mountains which many scientists and organizations have dedicated their efforts to protect for future generations. To book an ecotour to visit some of these, contact Phosy Thalang Guesthouse in Nakaifacebook.com/PhosyThalangGuesthouse

Fate helped us find this remarkable place. After a visit at the nearby zoo, we meandered down the road and spotted...