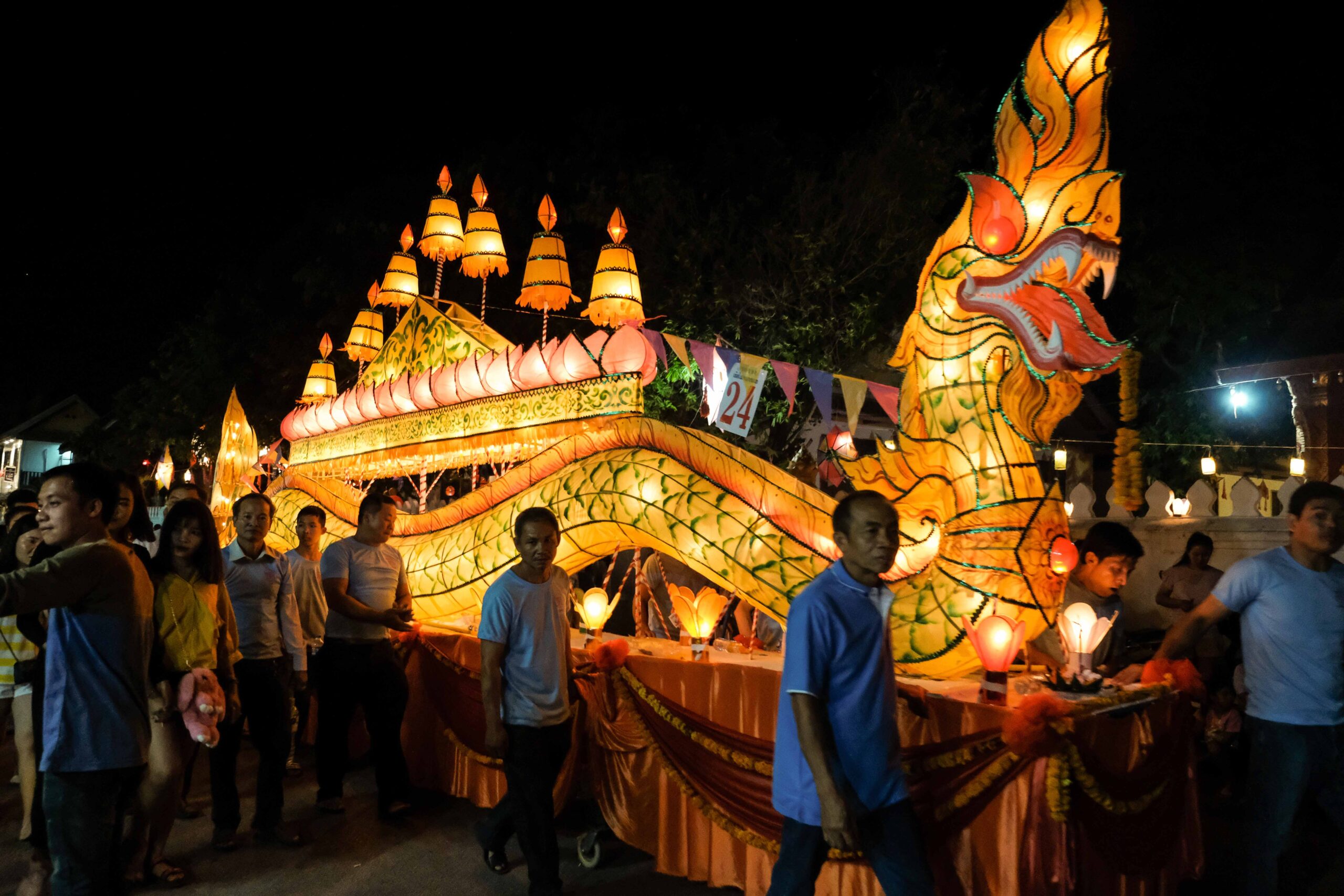 Luang Prabang’s most beautiful festival returns
After 2 years of pared-down festivities due to the pandemic, the end of Buddhist Lent and Boun Lai Heua Fai (Fireboat Festival) will be in full swing this year after the country opened its borders in May. The full moon marking the end of Buddhist Lent will fall on October 10th this year, with the Fireboat Festival held the following evening. This is the most charming festival by far in the Lao calendar. Festivities occur all over Laos, but the old northern capital offers the most atmospheric setting. Myriad twinkling lights set against a backdrop of gorgeous temples, quaint back streets, and historic architecture are hard to beat. Don’t forget your camera. 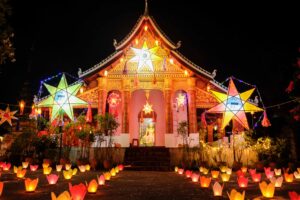 The previous three months of Buddhist Lent symbolize the time when Buddha ascended to heaven to visit his mother and his return to Earth marks the end of this period which also coincides with the end of the rainy season. The Rains Retreat is a time of reflection and monks will concentrate on studying the dharma and teaching new disciples. The end of Buddhist Lent marks the end of an austere period and is joyous and happy. Normal life resumes and wedding season can begin. During Lent, it is seen as unlucky to host social events, move house, or get married. People also try to abstain from alcohol or meat in an attempt to emulate the ascetic life the monks lead during Lent.
It is very auspicious to give alms on the morning of the full moon, pay reverence to your ancestors, and make merit for future endeavors. The streets in town are lined with devotees waiting for endless processions of monks to place sticky rice in their baskets or traditional khao tom (sticky rice and banana treat steamed in banana leaves). It’s also common to give candles, an enduring symbol of light and positivity.
During the day, many locals also make and sell floating votives of brightly colored flowers, banana leaves, and candles. Buy one and join the locals as they float them in the river in the evening.
At dusk, the highlight of the festival is the candlelit boat procession, held from the post office down the main street to Wat Xieng Thong. The boats are filled with candles and at the end of the evening, the ritual culminates with boats being placed in the Mekong and sailed away with the current.
The stars of the parade are the boats that can be very elaborate from fire-breathing Naga serpents with real flames or creatures with articulated wings that flap up and down. Each temple will spend weeks making huge boats and custom lanterns from bamboo and colored tissue paper in the shape of a Naga serpent or other mythical beast. The boats will be filled with candles and take part in the parade or simply put on display in the temple yard. Temples are creative with their choices, Wat Sibounheuang always makes a model of a Lao Airlines plane, and last year one temple went with the times and made a bright green coronavirus lantern. 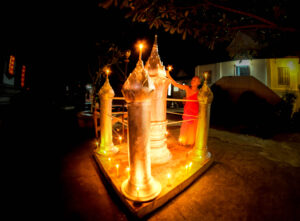 The Fireboat Festival is full of sights and smells, the air is redolent with the sweet smell of melting beeswax and gentle wafts of smoke. As well as the magnificent illuminated floats, people dress in traditional clothes, dancers from the theater perform tales from the Ramayana in monkey costumes, and masses of schoolchildren in crisp white shirts join the parade each carrying a lantern.
It’s also very popular for locals to don traditional costumes and take selfies amongst a backdrop of twinkling lights, the abundance of warm candles makes for a flattering softly-lit portrait. Locals often visit a circuit of the most popular and best-decorated temples: Wat Xieng Mouan with its big courtyard filled with geometric lines of colored paper lamps, Wat Choum Khong which probably has the thickest density of lanterns in town, and the huge white stupa at Wat Visoun is very evocative and atmospheric lit up warmly by lanterns placed on its many tiers.
At the old steps of Wat Xieng Thong, many people gather to watch the boats being placed in the Mekong and to launch their own floating votives, symbolically pushing away negative energy to the murky blackness of the river. Make a wish and hope to return to this beautiful festival again next year.

above: Wat Sop lit up with hundreds of lanterns

1. A naga-shaped boat moves through town 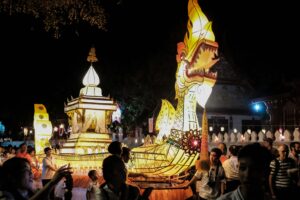 2. Novices pose for a photo with their temple decorations 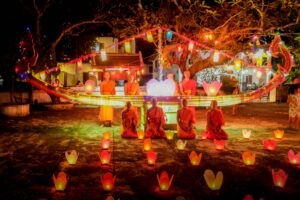 3. A novice adds candles to a festive lantern 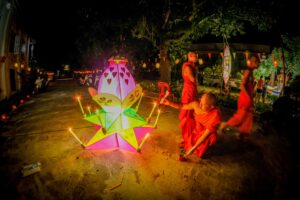 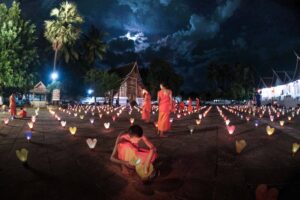 FOR MORE INFO
Tourism Luang Prabang typically launches a calendar of events in advance of the festival each year on its Facebook Page: fb.com/tourismluangprabang

GETTING THERE
Lao Airlines has frequent flights to Luang Prabang from Vientiane and Bangkok.

The Secret Lives of Islands

Tropical islands are curious places, symbolizing for many the ultimate escape – abandoning everyday life for lush,...